Who said that team-building exercises were lame and only for those lacking appropriate social skills? Well…actually, I did. In fact, it was something I always thought, and I’ve always considered myself quite the social butterfly. After last week, I can definitively tell you that I was wrong. Dead wrong.

Social butterfly or under-a-rock curmudgeon, team-building activities are helpful, particularly with teams of 4 or more where there are likely to be more differing personality types. Last week, I recently discovered the essentiality of team-building exercises on my recent Marketing Team Summit in Orange County, CA. As several of us on the marketing team live and work across the country, it was the first time for many of us to meet face-to-face as opposed to our weekly video conferences. Apryl Hanson and Alicia Anderson of the Blytheco Marketing Team, I had already met, but it was a great opportunity for me to get to know more about the other 5 team-members I had yet to meet.

Perhaps I found my recent excursion of team activities so drastically helpful because I was going into to it not knowing a whole lot about the team that I was working with as I had just started working a year before –and to that end, maybe I had more to gain by learning more about my fellow coworkers. But there is no doubt that the team-building exercise Apryl had planned was the true culprit responsible for the gratifying sense of team camaraderie that we all felt by the end of the summit. What’d she plan? A surprise cook-off!

In the vein of the TV show Chopped [where people are divided into teams and surprised with ingredients before being given a certain time to complete a meal with them], the ten of us were assigned to random teams. The CEO of our company was there also, so needless to say I was a bit jittery about being on his team. Not only was there the pressure of cooking on the spot, but also cooking on the spot with the chance of being partnered with the big boss man in a contest that we were supposed to win?!? Oy vey!!! Fear had struck its chord with me. All were a bit uneasy about the prospect of 10 people whipping up full course meals in such a limited space – especially because none of us knew what ingredients we’d have to cook with.

As luck would have it, my biggest fear came true and I was paired with Stephen Blythe, CEO of Blytheco LLC. We were all randomly assigned our ingredients and DING! The games had begun. Everyone had begun preparing their version of gourmet dishes and I reached into our bag of ingredients thinking…”Garbanzo beans!?!? What the h#*! am I gonna make with garbanzo beans!?!” 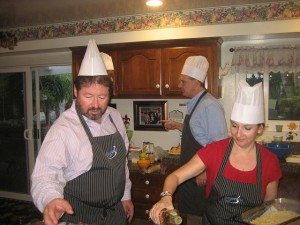 What transpired next surprised even me. The ease and fluidity in which everyone began to work was astonishing. There was no one tripping over one-another. No one frantically panicking (not even me!). And perhaps most importantly, there was a genuine sense of altruism and selflessness among teams – even though this was a contest! If someone needed help finding the garlic salt, their opponent would inherently assist them with getting it. Maybe it’s true what they say – that food brings people together because through the thick of it all, it felt as though the skin of tension had been peeled away. Everyone was at ease. And dare I say it; we all liked and respected each other a bit more after the activity.

To me, the importance of these exercises is their potential in establishing or improving team efficacy. We all got to know each other better, we all got to work with one another, and we all earned a level of respect for one another that we didn’t necessarily have before – to me, this all leads to our ability to produce better results [as a team]. For me personally, the activity also reinforced the belief of my importance within the company along with my self-efficacy. I somehow knew more so that I was valued in the company because of my importance in my cook-off team. Moreover, I respected these people A LOT more and felt it reciprocated. Because of 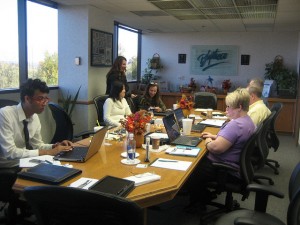 that respect, there is a renewed sense of devotion for me at Blytheco, not just with my marketing team, but with the whole company. Even social butterflies have room to grow.

Dear Blytheco clients: oh how we love thee, let us count the ways… and…

Managing Risk: The Country Doctor vs. the Specialist

We all remember Dr. Marcus Welby – the ultimate ‘Country Doctor’ (Maybe not and I…

Earlier this week, we discussed the current prevalence of social media in commerce and its…

Sage is offering amnesty to users of Sage SalesLogix!

It’s true! If your Sage SalesLogix maintenance & support plan has lapsed, Sage will will…