In America, we have our major national holidays like 4th of July, Memorial Day, and Thanksgiving.

Then there are those minor holidays and observances that  we love to celebrate, but they don’t earn us a paid day off from work, such as Halloween, St. Patricks’ Day, or Columbus Day.

But there’s a whole treasure trove of under-publicized observances that hardly get 1/10 the shine that a big day like Christmas gets.

So our #BlythecoOC office decided enough was enough.  It was time to elevate one of these lesser know observances to a level of awareness worthy of a string of 100 blinking LED lights in the shape of little candle flames.

The lucky recipient of our benefaction?

Yes, that delightful toy, consisting of a string wound around an axle, sandwiched between two disks which  cause many children of all ages to abandon it in frustration in about 43.5 seconds of playing with it!

Why’d we pick it?

Honorable mention in the trick category: Sally Brown, Director of Client Administration.  Her trick was “walk the dog” (although, it pretty much looked like she was just dragging the yo-yo on the floor behind her!) 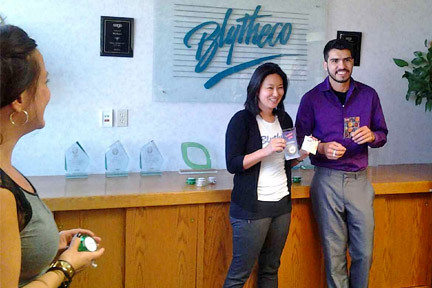 If you’re interested in working hard with a group of talented team members who also like to have fun, check out some of our open positions.

[Free Webinar] Wholesale Distribution 2017: What Strategies and Technologies Do You Need for Success?

In physics, there is no action without a reaction. In business, the technologies that make…

Many Blytheco clients, friends, and partners joined us Thursday, June 17 for a very special…

Gluten-Free Labeling on the Horizon